I decided to make this ukulele as a speculative instrument for my youngest son as he asked if he could have a new instrument to learn on.  We also thought we would like this new instrument I went to work on the design and used a software programme called G Thang to produce a design we liked and then printed it out.  We first chose a 1 piece sitka spruce top and drew the rough outline of the ukulele onto it, the spruce was then thicknessed to a stiffness that would be strong enough to resist the string tension, but thin enough to create a responsive and toneful instrument.  I had in my stock a rather nice cocobolo back and side set for a ukulele and the rest of the instrument was going to made out of scraps and off cuts. 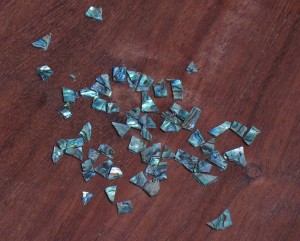 To make the rosette I first routed a channel  in the sitka spruce 3/8" wide and made it about 10 thousands of an inch deeper than my abalone stock.   I always brush at least 2 coats of shellac into the groove and around the rosette area.  I then installed the purfling lines with ca (super glue), in this case they were green, red, white, black, white.  I sanded these purflings almost flush after the ca had cured.

Now for the fun part, the abalone offcuts/scraps were wrapped in a soft cloth and beaten on a hard surface with a hammer!
It's surprisingly difficult to make the pieces small enough for inlay, so I then used my end cutters to chop them up some more.  Once I had enough pieces, I began to place them into the channel between the purfling lines with a pair of tweezers and after I have filled an inch or so of the channel, I used a very tiny artist's paint brush to adjust/push their positions until I liked what i saw.  I then flooded a small amount of super watery ca onto the pieces to set them in place and carried on filling the channel with pieces. 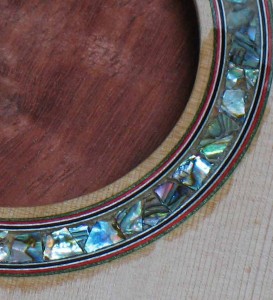 When the rosette channel is completely filled with abalone scraps, I flooded the whole thing with ca and allowed it to cure overnight.  I repeated this flooding maybe 4 or 5 times until the rosette was slightly overfilled (always allowing curing time after each flooding) and then sanded flush with 180 grit followed by 320.

The ca sits over the top of the abalone and creates a lovely 3d effect, so you don't have to sand any abalone and cover it with scratches. 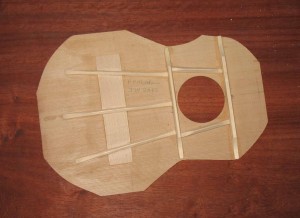 The top was then braced and the bridge patch is applied, these pieces get glued on in the go bar deck.  The braces are refined by shaving and shaping until the top is resonant and musical, this can take many hours. 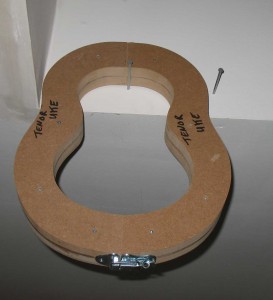 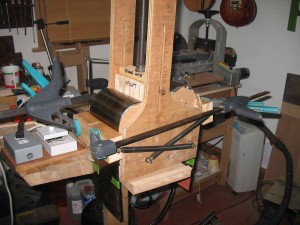 The bending forms are then put in the bending machine, the sides are cut to profile and thicknessed until they are pliable.  The sides are misted with distilled water and wrapped in aluminium foil and then placed between two spring steel slats, on-top of the steel slats I place a silicone heating blanket and then another spring steel slat.  This sandwich is placed into the bending machine and the heat is turned on.  I use a digital temperate probe to monitor things and once the temperature reaches about 22o°c I start to crank down the waist area of the instrument.  With the temperature still rising I then form the curves of the upper and lower bouts, the temperature by now will have reached about 250ºc and I fully crank down the waist.  I allow the assembly to cook for about five minutes and then leave to cool down. 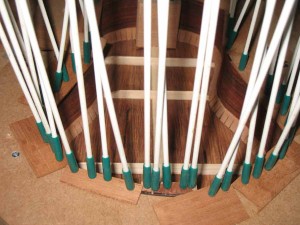 After the sides come out of the bending machine, they get trimmed to length and are fitted into the mould.

With the sides in the mould, the tail and neck block are glued on and kerfed linings fitted and glued to the top and back of the sides.

The back is produced by much the same process as the top and we are now ready to start closing the box. 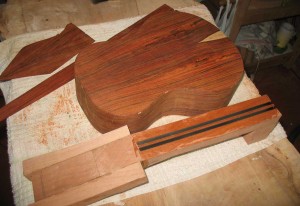 Next it's onto making the neck.  This neck was made from some mahogany reclaimed from and old bed frame, the headstock wings have been added and two carbon fibre reinforcing bars glued into the top surface with epoxy resin.  You can also see in the picture the preparation of some cocobolo off cuts for the headstock veneer and the binding strips.

Neck carving.  The basic neck shape has been created by laminating several pieces of mahogany.

The rough profile is band sawed out.  I like to add a volute to my necks, sometimes more correctly called a handstop.  It adds great strength to the neck at a vulnerable place were neck breaks can happen.

Now we start the carve by using rasps and a spoke shave.   I really enjoy this process as it is very 'crafty'. 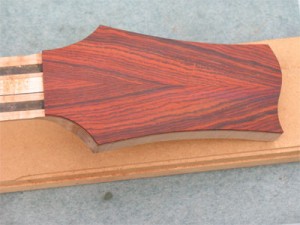 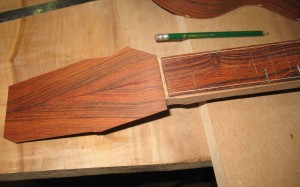 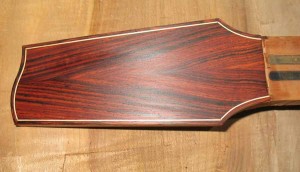 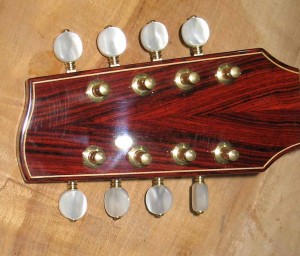 Binding and purfling is added, the headstock is then sanded flat.   The tuning machine holes are drilled and the tuners fitted. 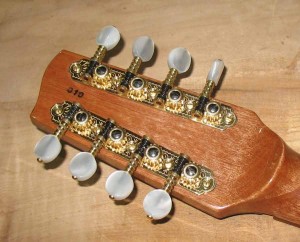 Rear of the headstock showing the neck volute. 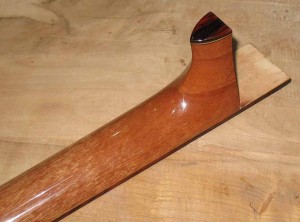 Here is the completed neck with the heel cap fitted and a few coats of finish on it.

The next step was to make the fretboard and inlay my trademark abalone fret markers.  I started off with a piece of cocobolo and cut it to the correct width, length and thickness.  I then cut the fret slots and add binding and purfling to the fretboard edges.

Here is the finished un fretted board. 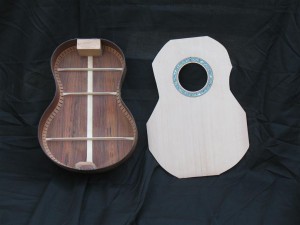 All the bits ready for assembly. 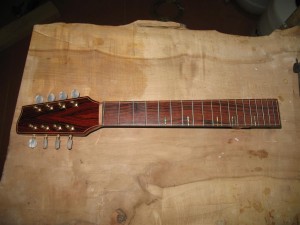 The neck is fretted and ready for the nut. 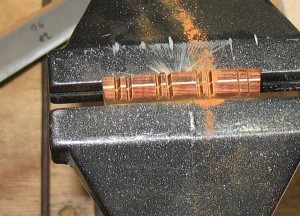 This is the nut for the ukulele made from two layers of cocobolo with a maple strip running through the middle.  The string slots have to be cut very accurately to make sure the strings lay on the fretboard in the correct position. 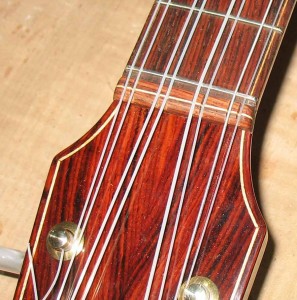 The nut is fitted and a trial run is started with all 8 strings on. 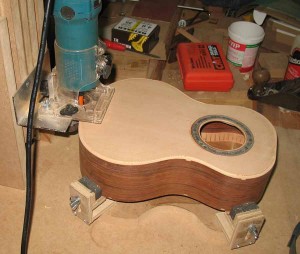 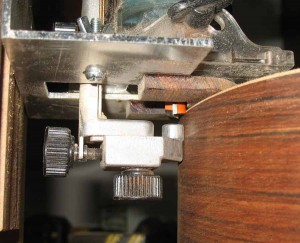 The body is set up ready for the cutting of the binding channels and then the binding and purfling is added. 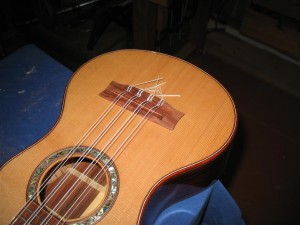 The bridge is added as well as the unprofiled saddle.  The uke is strung up and tested for intonation.